With Sparklight TV, almost any screen that connects to the internet can stream your favorite entertainment. Here are the devices we currently support: 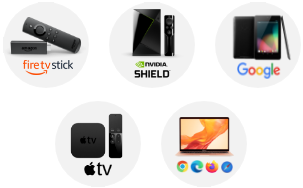 Note: Emergency Alert System notifications are not supported when viewing Sparklight TV on a browser, smartphone, tablet or while casting to a TV.

Amazon Fire TV Edition - NEW
A new breed of 4K TVs with Amazon Fire TV embedded as the operating system brings the ultimate experience for those invested in the Amazon ecosystem.

Sparklight TV is accessible via popular browsers across a variety of platforms at https://sparklighttv.app/

Sparklight is not endorsed by or affiliated with Apple®, Amazon®, Android®, or Google®, and all trademarks are those of their respective owners. As an Amazon Associate Sparklight earns from qualifying purchases

Was This Article Helpful?

Thank you for your feedback!

Thank you for your vote!